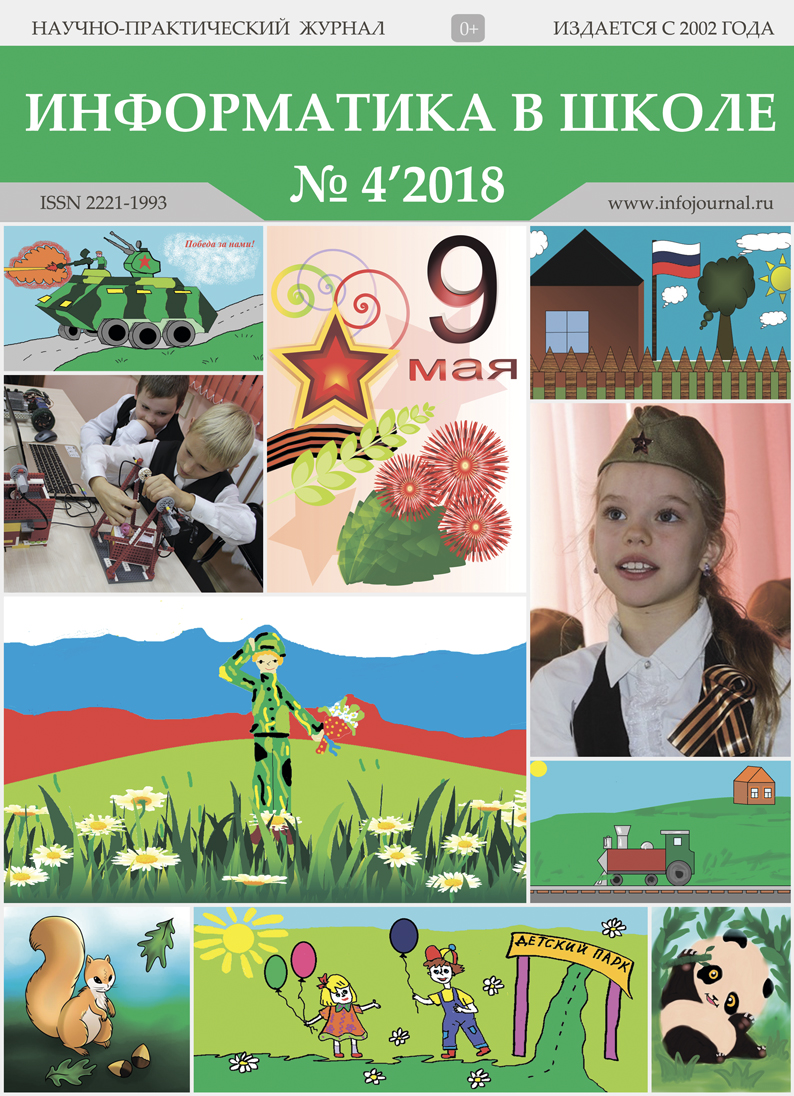 Buy the print version of journal. The price includes delivery by mail.

EDUCATIONAL QUEST ON INFORMATICS AND PROGRAMMING “ADVENTURE OF PRINCE JAVA”

The article describes an educational quest on the mathematical foundations of informatics and programming, that contains tasks (with solutions and an assessment system) on the themes of the informatics course: “Logic”, “Number systems”, “Graphs”, “Cryptography”.
Keywords: educational quest, informatics, extracurricular activities.

THE QUESTS IN THE TEACHING OF INFORMATICS

The article discusses the role and place of quests in teaching informatics. Special attention is paid to web quests. The authors describe in detail the tools that help in creating materials for didactic games in the form of adventure or travel.
Keywords: quest, didactic game, e-learning, online services.

DEVELOPMENT OF ENGINEERING CULTURE OF SCHOOLCHILDREN

The article defines the components of the engineering culture that can be formed in school, and summarizes the experience of the use of robotic equipment Moway in educational organizations of the Moscow region.
Keywords: engineering culture, extracurricular activities, informatics, technology, educational robotics.

THE RELEVANCE OF ALGORITHMIZATION AND PROGRAMMING IN THE INFORMATICS COURSE OF SECONDARY EDUCATIONAL ESTABLISHMENTS. THE CHOICE OF PROGRAMMING LANGUAGE

A simple technique for constructing 3D models of ground surface objects from a single space image is proposed. The method gives an estimation of the model from the reference object, for which the value of the height corresponding to the given segment on the image giving the altitude coefficient in the spatial neighborhood of the object is known, i.e. scaling coefficient along the axis of the applicator. The altitude coefficient varies with time, i.e. from snapshot to snapshot, which allows to evaluate models of objects of different clarity, from low to high, using the space-time neighborhood of the reference object. With a distance from the standard, the altitude coefficient is continuously changing, which makes it possible to estimate the height of a distant object by “moving” the calculations through a chain of closer objects connecting the source and the final. Using an alternative “calculation by shadow” allows us to estimate the model when photographing the terrain in the nadir, i.e. in the absence of visibility of the side parts of the design object. In view of the availability of practical application of this methodology in the general education system, a number of project works of schoolchildren in the field of 3D modeling based on space images data.
Keywords: landfill, dump, 3D model, 3D modeling, economic zone, building, rigid object, Sketch Up, height, scale factor, Google Earth, project work.

The article examines the influence of the choice of the type of software used in the educational activities of the educational organization, on the spiritual and moral education of students. Particular attention is paid to the need for the formation of a free individual who can make an independent, competent, qualified choice in the field of software and be responsible for the consequences of the decision.
Keywords: freeware, spiritual and moral education, freedom.

The article discusses the features of using the computer algebra system Maple for demonstrating the operation of encryption algorithms in the process of studying the protection of information in the school informatics course. The programs that allow encryption and decryption of texts using various historical ciphers are given.
Keywords: encryption, decryption of text, Maple.

The article substantiates the effectiveness of using mental-empirical trit-tasks in the study of the theme “Algorithmization” in the school course of informatics. The leading idea of the trit-task lies in its formulation in the sensory, model (cognitive) and conceptual forms. The article presents the procedural structure of thought operations in the compilation of algorithms, gives examples of trit-tasks for the study of basic algorithmic constructions.
Keywords: algorithmic thinking, mental schemes, algorithmization, school course of informatics.

The article talks about the importance of programming to participate in the Olympiad and for future professional orientation. Also the popular programming environment Scratch and the Olympiad to create projects using this programming language since primary school are discussed. The article presents examples of projects for this Olympiad.
Keywords: programming, Scratch, sprite, script, Olympiad.